During the period leading up to the concert, James had been visiting the New Horizons Youth Centre to lead workshops and rehearsals with the young people there, and to form a choir to sing at this concert. They performed a medley of songs on their own, and then joined with the Guardian's Angels to sing Bob Chilcott's epic version of The 12 Days of Christmas.
Monday 13th December 2010

Central Harmony is a School based choir for children with their parents to attend together. Apinder Sidhu, who runs the choir as part of the CHESS after school activities project, set up this performance for the choir at the Paul Robeson Theatre in Hounslow. 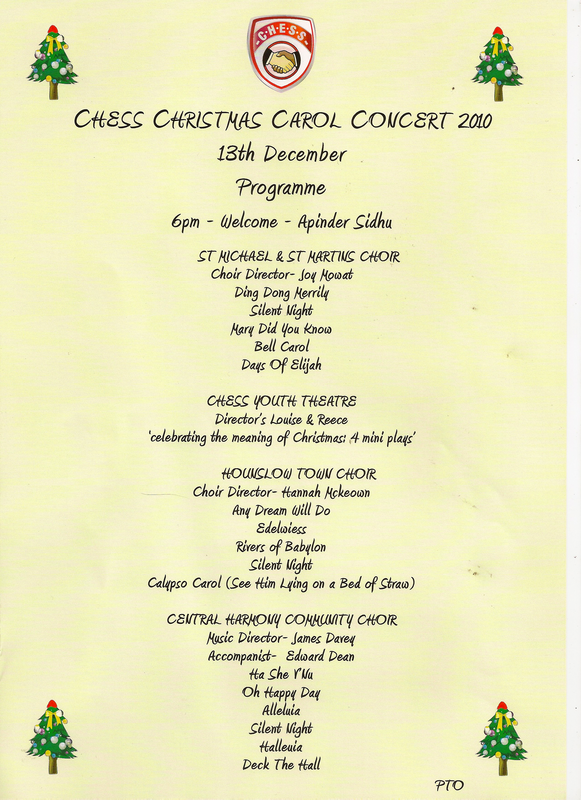 The Aylesbury Festival Choir join forces with Pentagon Brass to present a concert of Italian Baroque choral repertoire transcribed for Brass Quintet. The combination was well suited to the Aylesbury Methodist Church where the concert took place, and Joss O'Kelly, writer for the Bucks Herald, reviewed this latest concert by the choir:
Friday 26th November 2010

Musicians in the Gallery

James Davey and Rachel Staunton team up with their two office choirs, The Guardian's Angels and the Debenhams Choir, to give a short concert to friends and colleagues at the end of the working day. The performance took place in the Pangolin Gallery, at the entrance to Kings Place, and was a prequel to James and Rachel's bigger plan of a massed choirs performance of the Messiah. 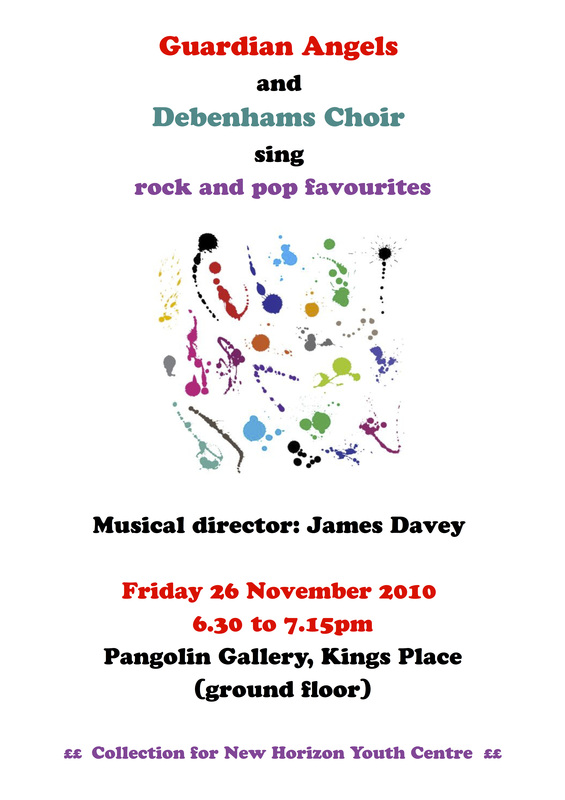 As part of a recruitment day for the Aylesbury Festival Choir, which included a Flashmob performance in Aylesbury's Friar's Square Shopping Centre, the choir helped draw potential recruits into a public workshop in the new Waterside Theatre.

The new theatre has a capacity of 1200 and replaces the older 800-seater Civic Centre, which has since been demolished, where James conducted his first concert with the choir - A complete performance of Handel's Messiah.

The choir's first visit to the new Theatre was during the accoustic checks, performed by expert sound technicians, before the building was officially opened to the public. The choir provided a team of singers to perform excerpts of the Messiah, so that the sound technicians could measure how vocal groups would sound int he new space. 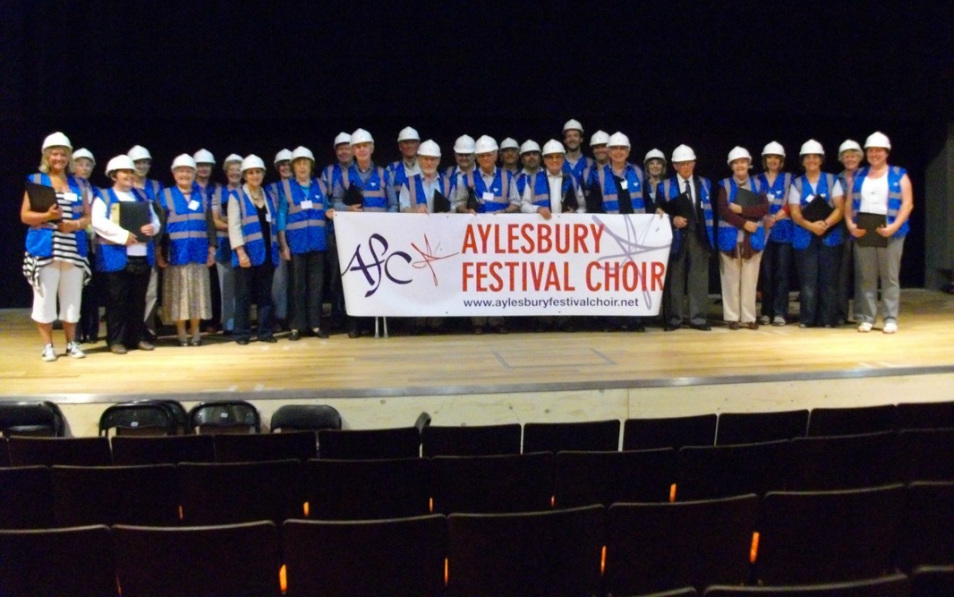 Music In Offices ran a workshop in collaboration with 123 Sing! - an initiative run by Classic FM and Making Music to get everyone singing. 123sing! is a three-day festival of singing that inspired lots of people to start singing and raise money for music education and therapy for disadvantaged children and adults in the UK.

Music In Offices reported on the event:

"We joined up with Classic Fm's 123 Sing Festival and invited our city workers to join in an exploratory and fun filled lunch hour. Led by James Davey this challenged, engaged and surpassed expectations!"

Sing Away Your Stress

To raise awareness of the choir at the Guardian, and to encourage new members to join, the Guardian held a singing workshop. The success of these events has often been down to the great publicity (below) and also the offer of FREE cakes for all participants! 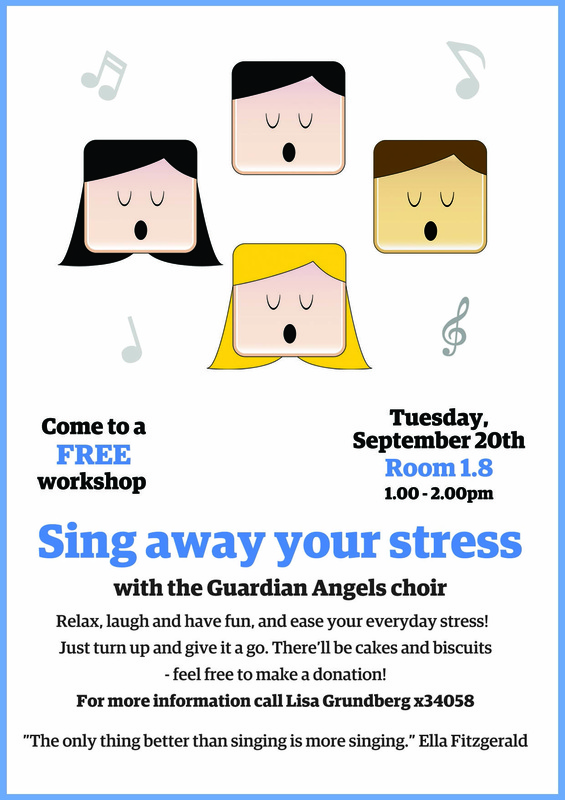 James Davey returned to Cranleigh this week to co-lead the chamber choirs on the Cranleigh Choral Week, headed by Jeffrey Wynn Davies. The week culminated in a performance from each of 4 chamber choirs, followed by a larger combined chorus concert at the end of the week, in Winchester Cathedral. In the programme was Leonard Bernstein's Chichester Psalms, for which James took the Bass solo part in the performance.
Sunday 1st - 8th August 2010 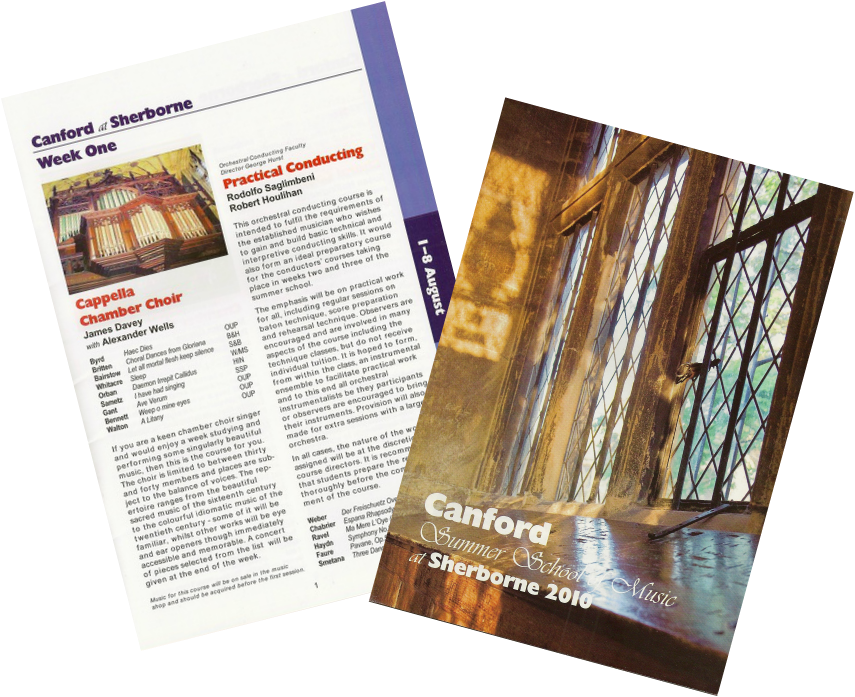 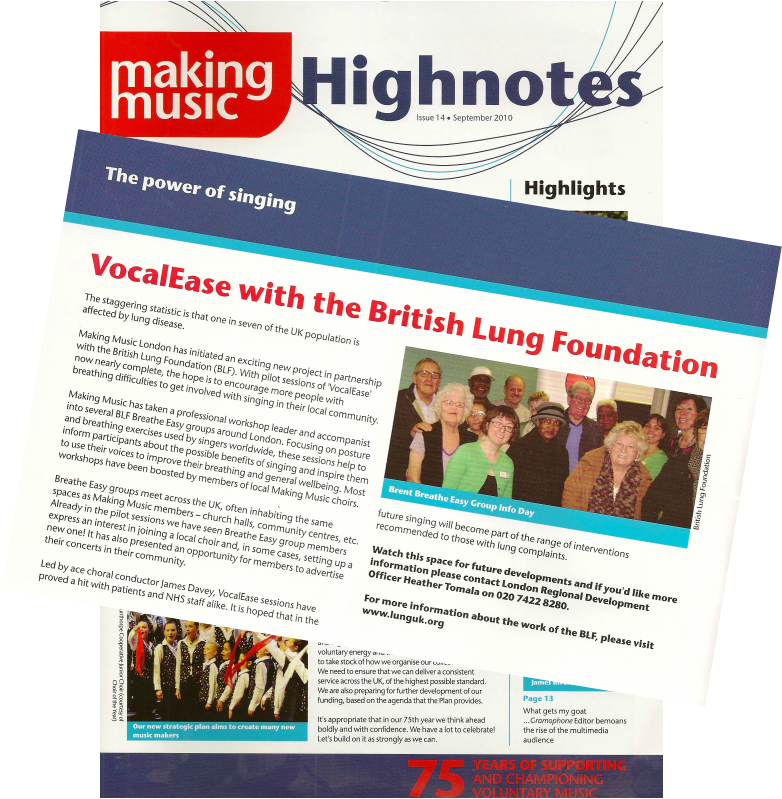 I write to express sincere thanks for the visit of James Davey and Heather Tomala to our group on the 28th July 2010.

We had two ladies from the Teddington Choral Society join us at that afternoons' meeting. They knew nothing of the BLF or Breathe Easy group and they, along with members, were a little apprehensive of what might be asked of them. However, with the very sensitive careful nurturing from James we all warmed to his teaching of breathing techniques and responded to all he asked of us.

The whole afternoon was great fun, so enjoyable, and it was amazing just how James managed to get such a harmonius result, and all credit to Heather for the mastering of such a wayward piano.

Much more important was the very real fact that all were breathing a little deeper and more controlled - yes there were a few coughing but all were learning without realising the obvious benefits. A Physio could not have achieved such a positive and benefitial result in such a short space of time - nor left such a lasting pleasurable memory.

I would willingly support your work or any application for funding - it's value cannot be measured by financial accountability. People for whom lives are daily dominated by long-term conditions find few pleasures and relief - our room was buzzing after James and Heather had ended their session. I have never seen so many smiles and such pleasure in any of my Breathe Easy members in all the years I have been taking this group. It was voted the best meeting we have ever had. How is that for accolade - I might say well deserved praise.

To say a simple 'thank you' is hardly sufficient for James and Heather. Thank you both. Never under estimate the value of all you have done - nor should you forget what our members will remember of your visit.

I do hope your work continues and others benefit from such a truly great experience.

As part of the Great Missenden Patronal Festival of Music, local schools were invited to take part in a choral workshop during the day, lead by James Davey. The learned music during the day was then performed to parents and friends at the end of the day. The music was chosen from Rebacca Lawrence's set of songs called 'Past and Present'. A particular favourite of the day was Power in Me, a rock-pop styled ballad about inner strength and confidence.

Workshops and Warm-ups for Choir of the Year Competition Heats

A former winner of the Choir of the Year competition, James Davey was invited to lead the warm-up at the start of each of two of the days of heats, and to lead a closing workshop whilst the judges went away to make their adjudication. James covered the days in Warwick Arts Centre and at the Sheldonian Theatre in Oxford. The presenters he worked with were Catherine Bott and Sara Mohr-Pietsch. 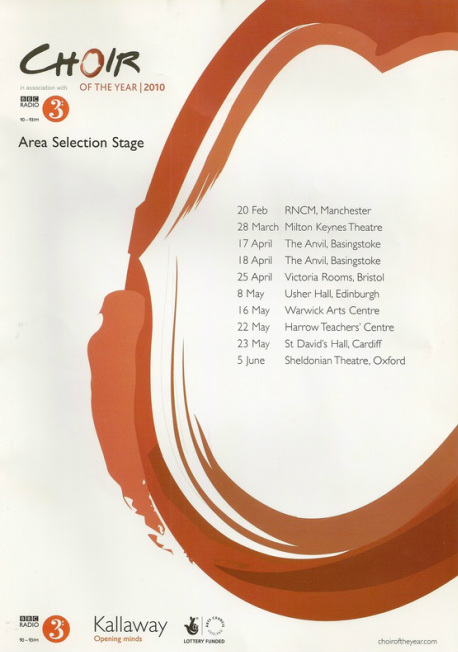 The Guardian reported on the concert: 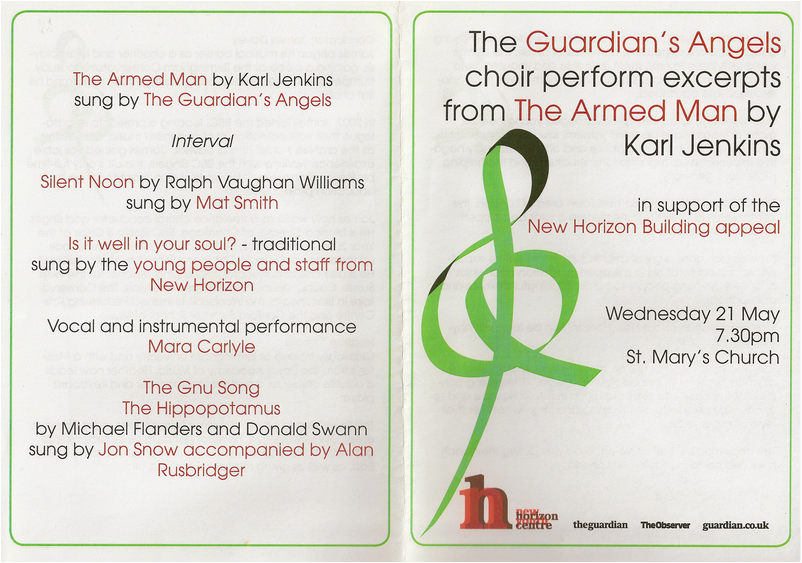 Central Harmony at the London Sangerstevne 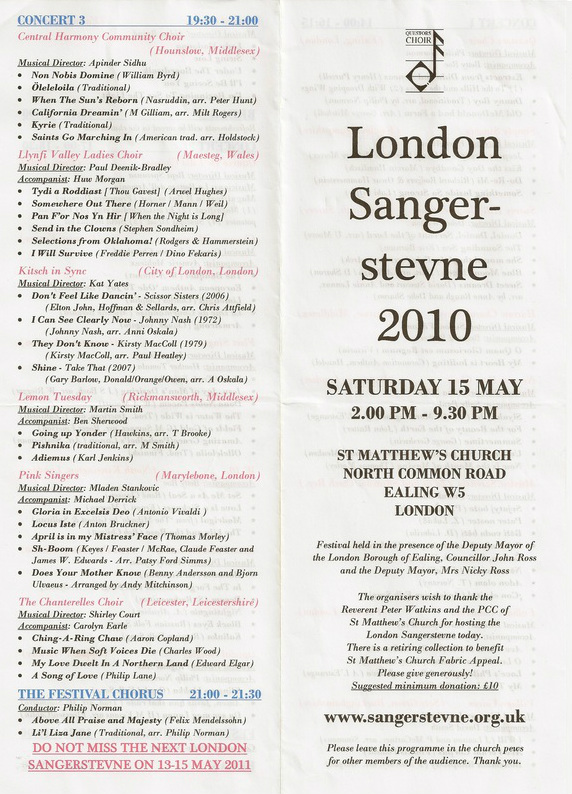 As part of the Southbank Centre's Chorus weekend, the Fleet Singers joined a number of other choirs, including the Bournemouth Symphony Choir and singers from Mary King's Voicelab. Mary King visited the choir at rehearsal to check on their progress with this challenging work, and was very impressed with what the community choir could achieve.
Friday 30th April 2010

Amy Bebbington and James Davey from the Voicebox team, visited the Epsom Playhouse to deliver a training session for conductors. The session was on behalf of Sing-Up, organised by Angela McKenzie the area representative for the scheme. The focus was on teaching skills for leading choirs efficiently and on basic conducting skills. 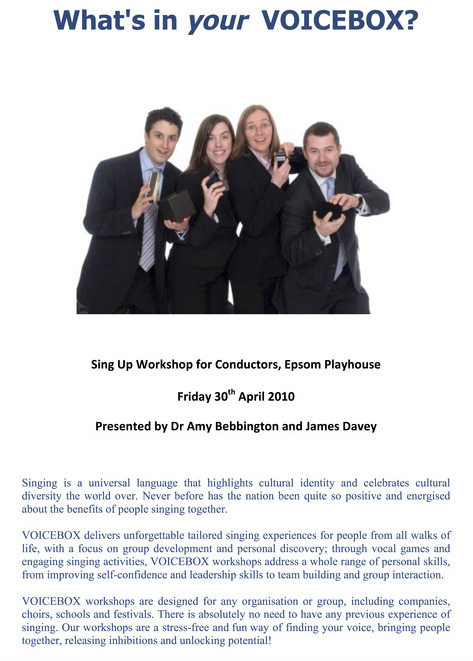 In a day of activities to re-launch the new Music Centre service, James Davey lead beginner workshop sessions throughout the day for groups of keen participants wanting to experience group singing. The day culminated in a group performance of an improvised piece which had been learned earlier in the day during sessions with Jason Thornton, in which a free-styled new piece was created by the participants. 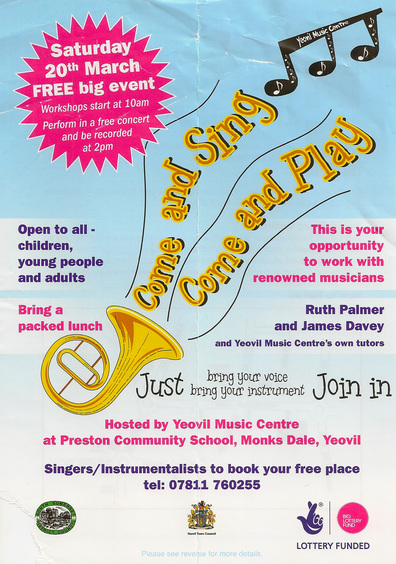 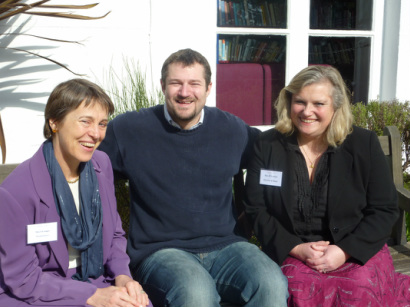 James Davey's former Head of Music at his school in Cambridge, Iain Cooper, invited him to lead a workshop at St Margaret's School in Exeter. The day was divided into two groups. The morning was comprised of two workshop sessions for children from local schools and county choirs. In the afternoon James worked with an advanced group of singers from the school.

Mary Lowles wrote about the day:

What a fantastic way to spend a Saturday! Last weekend, our choirs and many visitors benefitted from the opportunity of inspirational vocal tuition, in a lovely warm and positive atmosphere from the young, energetic and motivating choral trainer and conductor, James Davey. It is impossible to recapture the buzz and humour that emminated from each of the three Master Classes but without exception, the students worked hard without really knowing it and picked up many tips and some new repertoire, particularly warm-ups, which have already established themselves as firm favourites for us at school.

We were delighted to welcome nearly 100 visiting students to St Margaret's, to benefit from the experience and they all seemed to go away excited and smiling - affirmation indeed!

The music staff were at school all day and by 4pm, still had not had enough. It is always a privilege and so refreshing to hear new approaches and techniques, and to discuss one' s work with like-minded and experienced people.

We very much hope to be able to host another similar event in the future but in the meantime, the memories of the fun we had and the tips we learnt will be with us all for a long time yet!

"On Saturday morning we went to the Junior Master Class.

We did a good warm-up. We did a performance.

We had some biscuits. It was brilliant!"