Songs about the Weather

The Fleet Singers joined forces with the Belsize Community Choir to give a performance of Benjamin Till's emotive piece for the first time since it premiered in June 2012. The Fleet Singers commissioned the piece, marking the Queen's Jubilee.

This performance included local celebrity, Diana Aubrey, as the narrator. The work is based on texts contributed by the choir and woven amongst newspaper articles spanning the past 60 years. Till noticed that there was a running theme throughout the contributed material and his piece is divided into 5 sections, at 10 year intervals through the Queen's reign, and each marked by an extreme weather event!

The Chandos Chamber Choir teamed up with talented young viol group, Chelys, and composer, Michael Mullen, to perform a programme of music for choir and viols around the themes of gold, opulence and coronation.

For the programme, Michael Mullen composed a magnificent setting of Sadoc Sacerdos (or "Zadok the Priest") to mark the discovery of the remains of King Richard III, found buried under a car park in Leicester. The piece is scored for 8 part choir and 8 viols, and is based on the concept of the winding and textured works of the Eton Songbook. It incorporates many textures, from solo unaccompanied voice to full orchestration, and has a brilliant sense of triumph!

The programme also included a beautiful contemporary setting by David Mackay, called Aedh wishes for the cloths of Heaven. It is originally scored for choir with organ but, with the composers permission, was transcribed a few years ago by conductor Matthew Manchester. 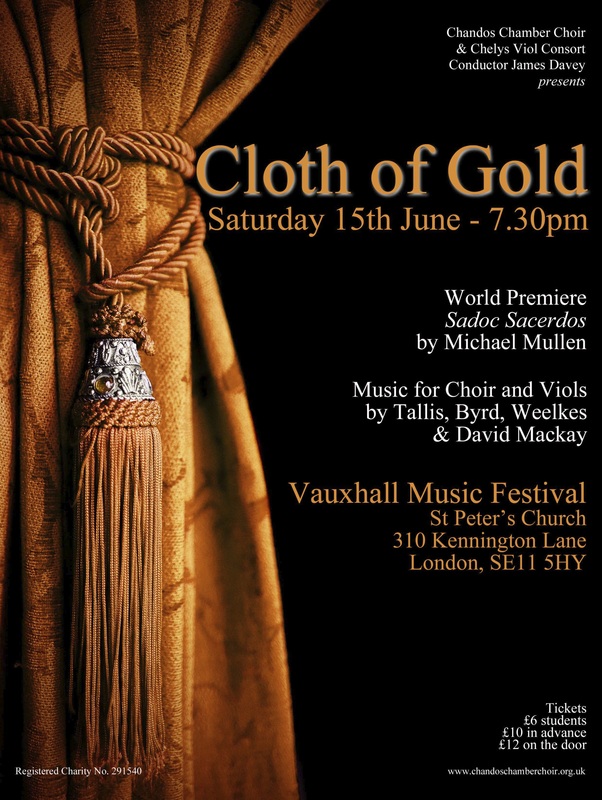 ChoirFixer was booked to provide the music for the funeral service of Olympic Sailor, Andrew Simpson. The funeral took place at Sherborne Abbey and the service was relayed to a gathered crowd outside the Abbey as well.
Saturday 18th May 2013

Commissioned by the Fleet Singers, Ode to Living Things was written by Philip Godfrey, who is also the accompanist to the choir. It is a set of short movements with a biological flavour. It begins with a movement entitled Ode to the Amoeba, setting the scene for a discovery and development of natural themes through the rest of the piece, with a very patriotic movement about trees at the heart of the set.

The Fleet Singers were very pleased to be able to work with the Camden Young Singers, for whom two of the movements in the Ode were written.

Just a couple of weeks earlier, the choir gave a preview of some of the movements of the new work, performing them at the Southbank Centre on 6th May as part of the Chorus Festival. 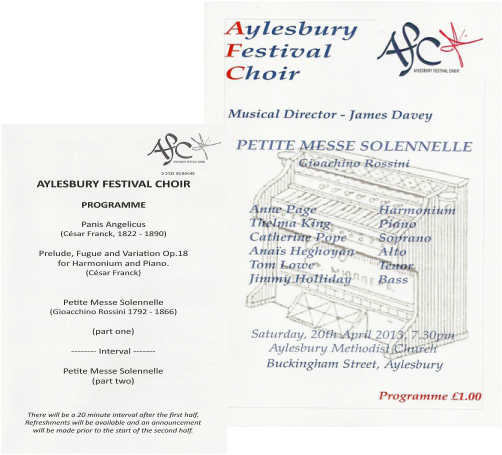 In a review in the Bucks Herald, Joss O'Kelly nicely sums up a wonderful evening of music, with some star soloists:

Aylesbury Festival Choir was in fine voice for a terrific concert on Saturday April 20 at the Methodist Church.

The evening began with a sweetly sung Panis Angelicus by César Franck and continued with the same composer’s Prelude, Fugue and variation for Harmonium and Piano. The pianist was AFC regular Thelma King, while on the harmonium was Anne Page, a musician at the forefront of the revival of this beautiful instrument. Both played superbly in this and the main work of the evening, Rossini’s Petite Messe Solennelle. Since the demise of the Civic Centre, AFC have been performing in a space that does not allow for an orchestra as well, but on this occasion it didn’t matter as the original was scored for piano (well, OK, two pianos) and harmonium so there wasn’t the lurking feeling that we were missing something.

Neither little, nor especially solemn, the Petite Messe is a work that abounds in great tunes, many of which are reminiscent of Rossini’s usual occupation as an operatic composer.

They sang in various combinations in virtually every section, as well as providing solos, all of which were deservedly well received. The showstopper was Tom Lowe’s highly operatic Domine Deus, which sounded like an aria in which the hero is about to ride off and rescue his girl from the clutches of the villain!

Aylesbury Festival Choir rose to the occasion with an impressive performance throughout, under the baton of Musical Director James Davey.

Workshop for Brighton Chamber of Commerce

The Brighton Chamber of Commerce held an event called "Business and Pleasure" and during the day, which attracted hundreds of local businesses, they scheduled a Pleasure Hour - in keeping with Brighton's reputation as a Pleasure Beach.

James Davey was invited to lead one of several activities for delegates to enjoy during Pleasure Hour, and formed a choir with 60 or so delegates. The results of the final 15mins of learning are recorded here:
Thursday 31st March 2013

The Chandos Chamber Choir performed Howell's Requiem as the centrepiece of this most challenging programme. Organist, Ian Shaw, accompanied expertly in the Cantata by Kenneth Leighton, Crucifixus Pro Nobis, with the tenor soloist Ben Thapa. A highlight of the evening was the set of songs from Benjamin Britten's Sacred and Profane, as setting of Medieval texts, the first of which the choir had memorised. The programme closed on a flourish with William Walton's The Twelve. 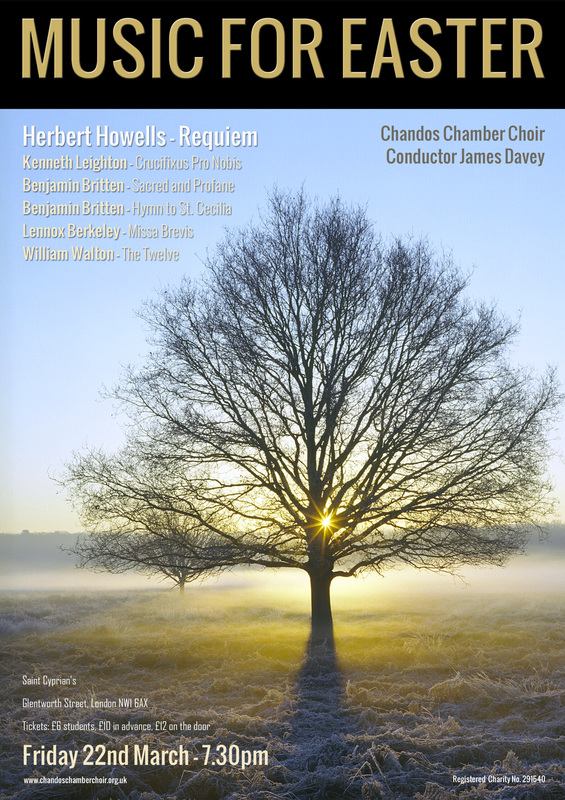 From Desk Til Dawn - at the London A Capella Festival

James Davey lead a Music In Offices workshop for singers and visitors to the London A Capella Festival at Kings Place. The singers learned two songs to perform to the crowds from the festival's Foyer Stage. The participants learned Stephen Hatfield's Run, Children, Run and a traditional Jamaican spiritual called Shut the door. 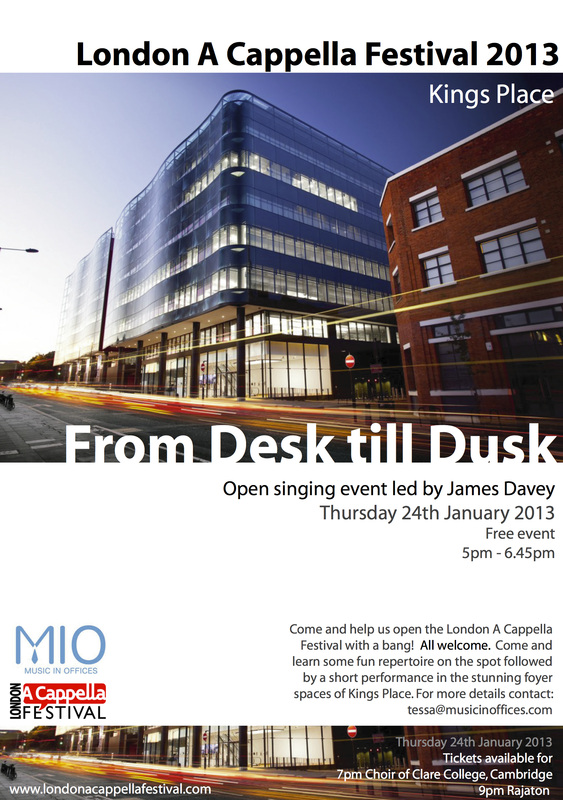 Young singers from Stepping Stones, a School for children with special needs based in Surrey, performed songs form the shows to delighted office staff at Clifford Chance, as the workers had their lunch.

Chantage on ESPN before the Liverpool Vs Fulham Match

Chantage recorded a version of Carol of the Bells by Leontovych, for broadcast on ESPN sports TV channel, ahead of the big match between Liverpool and Fulham on Saturday afternoon. The song was modified to include some of the names of footballers in the teams, as well as comments on their managers!

The video of the broadcast, during the Christmas holiday, is here in two parts: