The Chandos Chamber Choir gave a performance of a French flavour in Clerkenwell on 13th December. Their programme included a number of audience carols which had French heritage, including O Holy Night.A highlight of the performance was Mouton's Nesciens Mater being performed from under the tower, with the singers standing in a wide arc. The choir performed a variety of favourite French Christmas anthems, with just one rogue (or rather "rouge") item at the end - Rudolf the red nosed Reindeer! 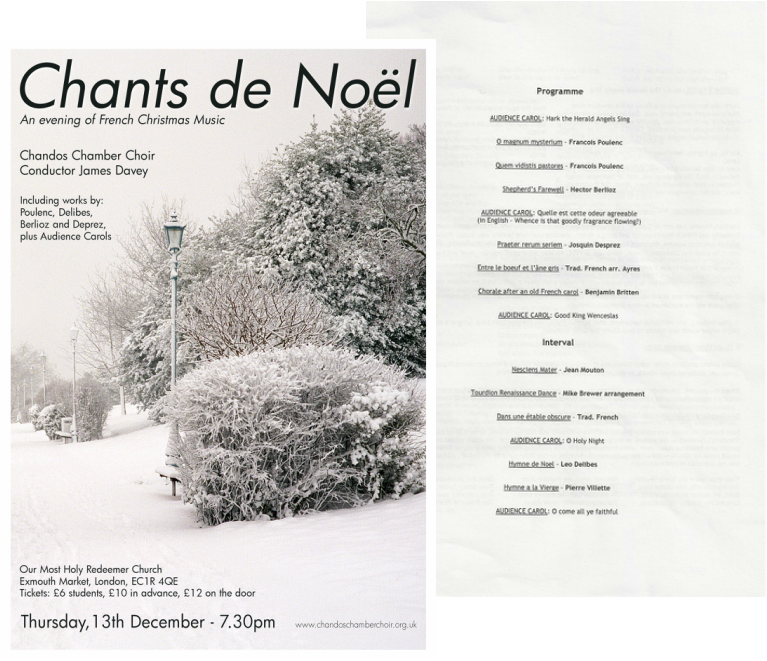 The staff choirs at Channel 4 and FreemantleMedia joined together for the first time to perform two Christmas favourites, entertaining singers from lots of other office choirs, all there to share some very high quality performances!

The evening kicked off with a massed choirs workshop with James Davey, learning a Christmas medley with Rudolf and White Christmas, which was later performed to a full house, to round off the concert. 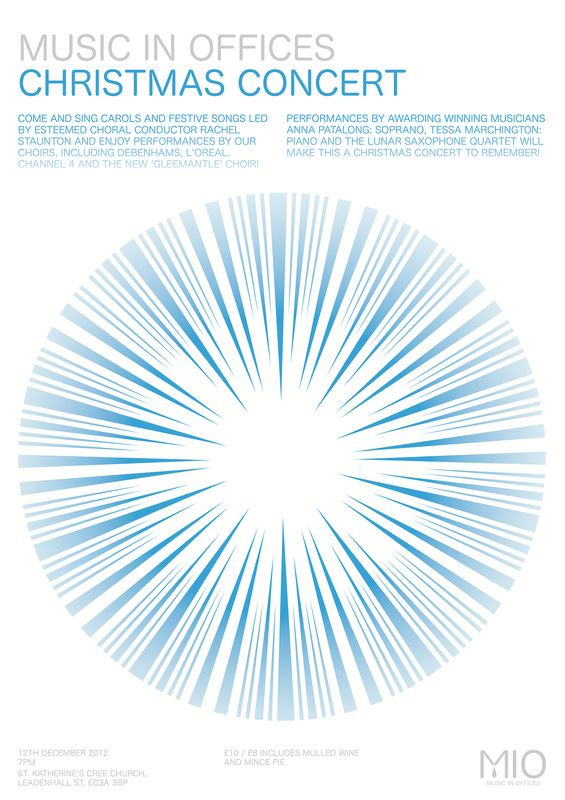 The Manor Choir, only one year since formation, are entertaining the crowds at the Waddesdon Manor Christmas evening of entertainment and music. 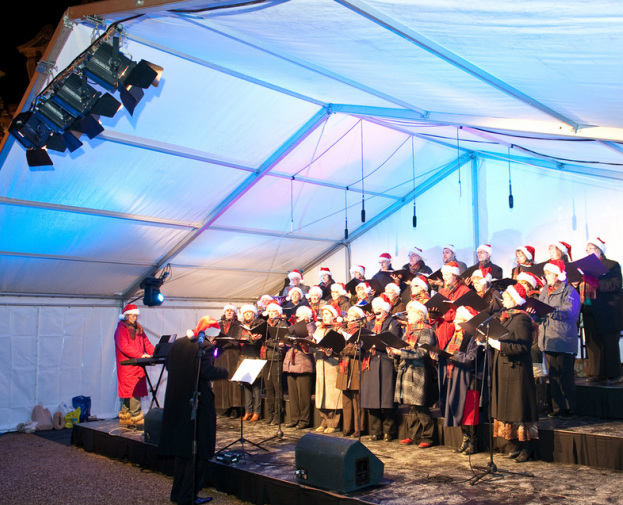 In a year of celebrations to mark the anniversary of the Queen's coronation, the Aylesbury Festival Choir gave a concert of English music, including a moving work by the choir's founder conductor, David Aylett. The piece is a setting of the text by Thomas Gray, Written in a Country Churchyard, and is scored for choir with clarinet and piano, played expertly by Paul Vowles and Thelma King respectively.

The Bucks Herald reported on the performance in the paper the following week: 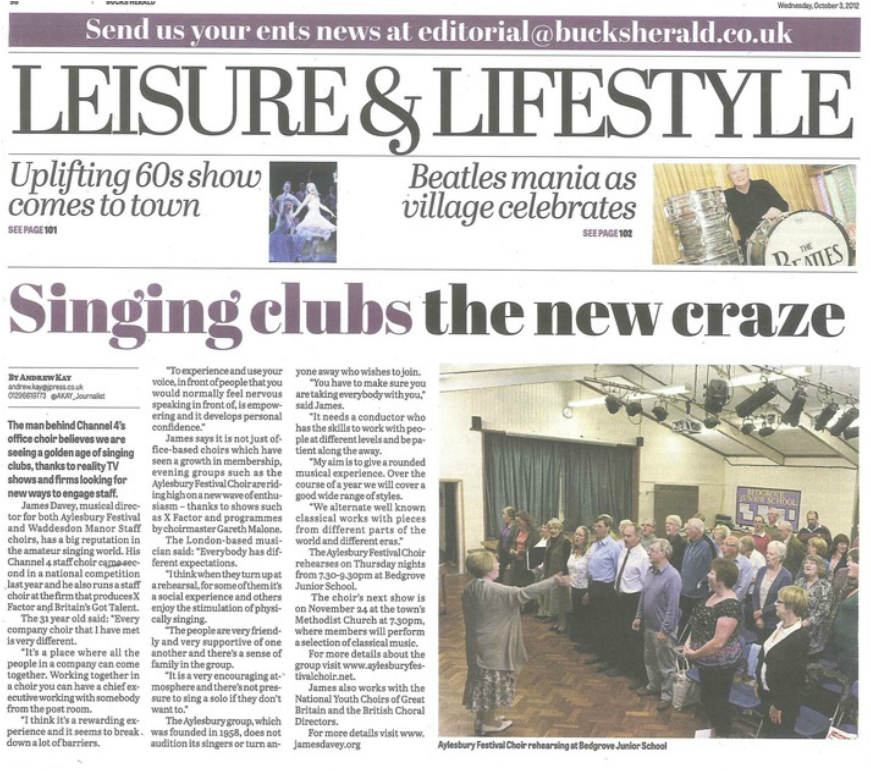 Chantage sing at A Night To Remember

Once again Chantage provided music for this event in aid of the Parachute Regiment Afghanistan Trust, for which the focus is on injured soldiers of recent conflicts in Afghanistan. You can watch a short Youtube montage below.

Here's what the trust reported:

ST DUNSTANS REMEMBRANCE SERVICE 07 NOVEMBER 2012
A memorable evening of music, hymns, solemnity and celebration was held at St Dunstan’s on 07 Nov 2012 to raise funds for The Afghanistan Trust. Attendance was at capacity with many familiar faces and also many new faces who gathered to remember and support The Afghanistan Trust. The Trust would like to thank Hazel and Francis Spear who sponsored the event which raised a substantial amount which is in excess of £6,000.

Pte Scott Meenagh 2 PARA spoke of his experiences whilst serving in Afghanistan and his achievement after being injured. The Trust is in process of purchasing a Quad Bike to assist Scott with his civilian employment when discharged from the Army.

Military author Max Arthur spoke about the Parachute Regiments evolvement to where they are today. On the evening he offered his latest book for sale and made a donation on the evening to the Trust.

Once again a Big Thankyou goes to Hannah Sisk who organised the event for the 3rd year. Hannah has many friends and contacts she was able to call on to help support the event and was assisted by Fiona MacDonald, their hard work and dedication resulted in a very successful evening.

A Thankyou is also extended to Lt Col J Boyd CO, RSM, Colour Party and Work Party from the 4th Battalion the Parachute Regiment who represented the Regiment on the evening. The Soldiers outside with their can raised over £530.

Chantage give a charity performance in aid of Aspire

In support of one of the choir's members, Alice Hubbard, and Alto in the group, Chantage helped Alice to raise funds for her nominated charity, Aspire. Aspire is a charity that supports those who have spinal injury, and earlier in 2012 Alice successfully completed a solo swim of the British Channel, raising yet further funds for Aspire. An enormous achievement. 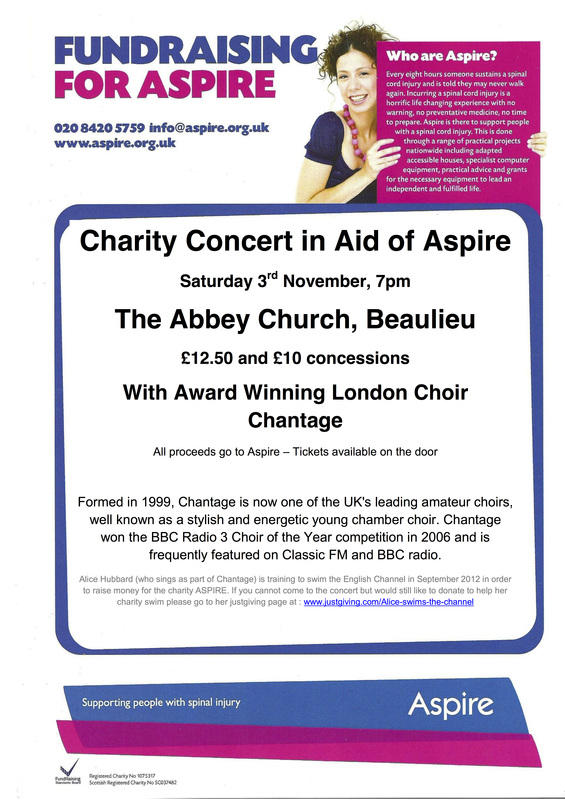 Returning this year to lead the main choral week, James took the Chorus through a programme of works themed around innocence and childhood. The main work for the week was Finzi's Intimations of Immortality which the chorus performed with the course Symphony Orchestra at the end of their week together.

The choir also performed Forever Child, a set of short songs by Ronald Corp which includes a beautiful setting of the text of God be in my head.

To start the week, James lead all of the delegates through a come-and-sing session on Schumann's Requiem. The piece is not often performed, written by Schumann during his later years whilst housed at a mental institution.

James returns to Sherborne (formerly Canford Summer School of Music) in 2014 to lead the Capella Choir once again. 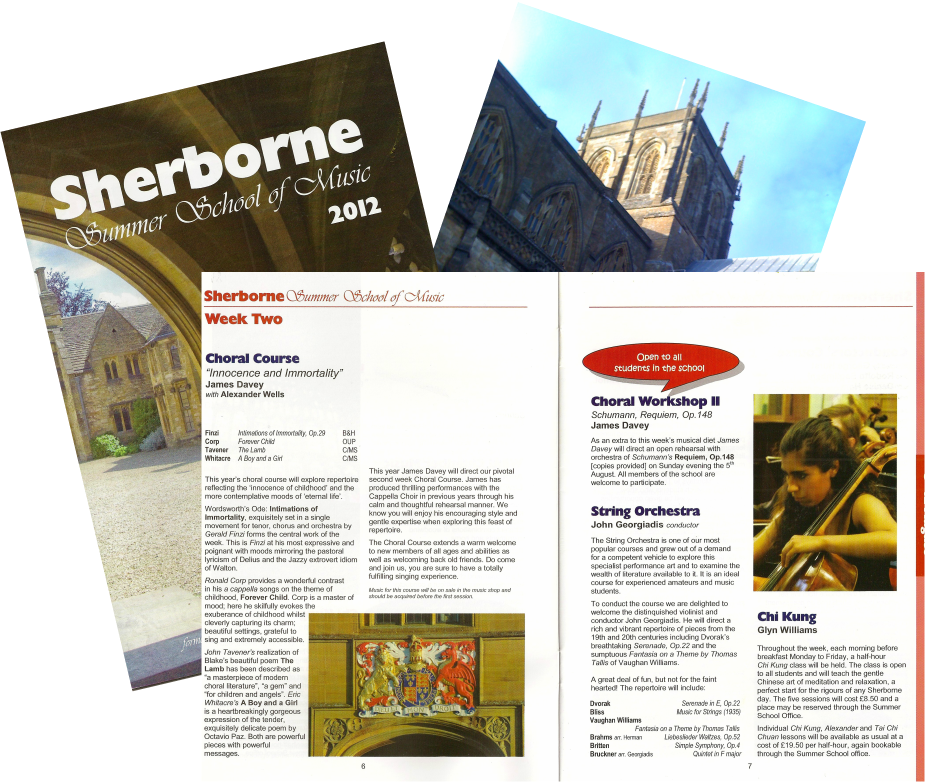 Chantage with Paco Pena at the Royal Festival Hall

Chantage took the stage with the great flamenco guitarist, Paco Pena, to perform his popular Missa Flamenco. The performance marked a new interpretation of the piece, in which an African vocal ensemble was incorporated, lead by South African composer Neo Muyanga. Paco and Neo had discovered a certain pattern of similarity between African and Flamenco rhythms, and this concert brought together the two elements in a fantastically exciting and successful experiment.
Saturday 7th July 2012

In a programme centred around the rising popularity of American choral music, with the arrival in the UK of Eric Whitacre, the Chandos Chamber Choir performed a concert of choral works by some of the USA's most well loved composers.

Accompanied by the Blackheath String Quartet, Eric Whitacre's 5 Hebrew Love Songs was at the heart of the programme, enveloped by works by Barber, Thompson, Paulus, Harris and 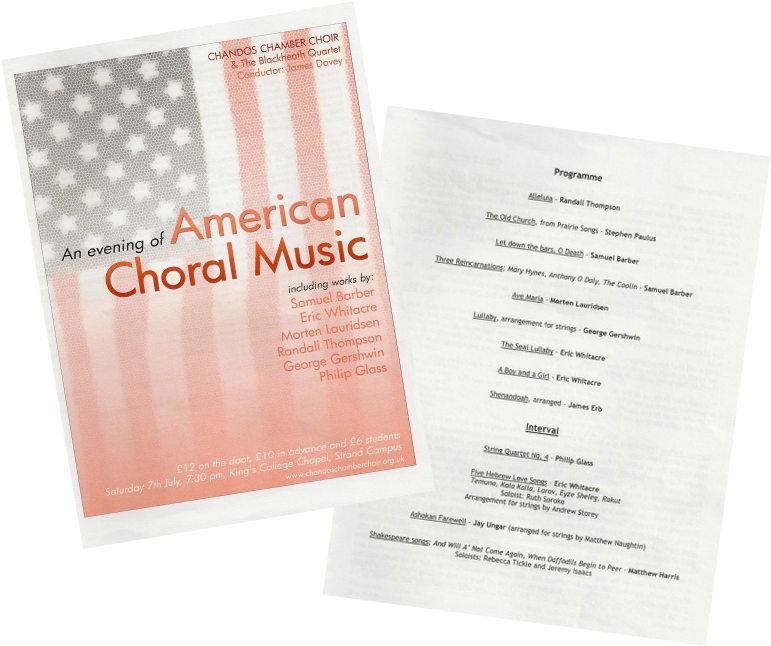 The Fleet Singers premiere new work by Benjamin Till

To mark the Queen's Jubilee year, the Fleet singers commissioned a new work by local composer, Benjamin Till. The work is based on texts contributed by the choir and woven amongst newspaper articles spanning the past 60 years. Till noticed that there was a running theme throughout the contributed material and his piece is divided into 5 sections, each marked by an extreme weather event!

The back-drop to the performance was a wonderful weather collage, created by children at Fleet Primary School nearby. The children worked with an artist over several days to create the huge wall hanging, divided into 5 vertical weather sections, that over-looked the performers.

4Tunes are the staff choir at Channel 4, under the umbrella of Music In Offices. The choir's success in the Office Choir of the Year competition has been well publicised within the company and, on 31st May, the choir was invited to perform to the company to open the all-staff conference at the Queen Elizabeth Conference Centre in Westminster.
Saturday 28th April 2012

The Armed Man has been scored for various forces since it was written, including a reduced orchestra version which was perfect for a smaller venue. However, it still included 14 different percussion instruments and several trumpeters!

In the first half of the concert the choir performed Ralph Vaughan-Williams set of Five Mystical Songs. Expertly sung by Lawrence Bloomfield. In addition to a review in the Bucks Herald, there were lovely comments from the audience.

"I just wanted to say how much I enjoyed your concert last night. You all did a fantastic job and should be very proud of the end result. I thought the balance from where I was sitting up in the gods was very good and the choir's diction was very clear. Well done to all of you!"

The choir's third performance with James since taking up the post of Musical Director, this concert showed a real departure from accompanied singing that had dominated previous programmes. 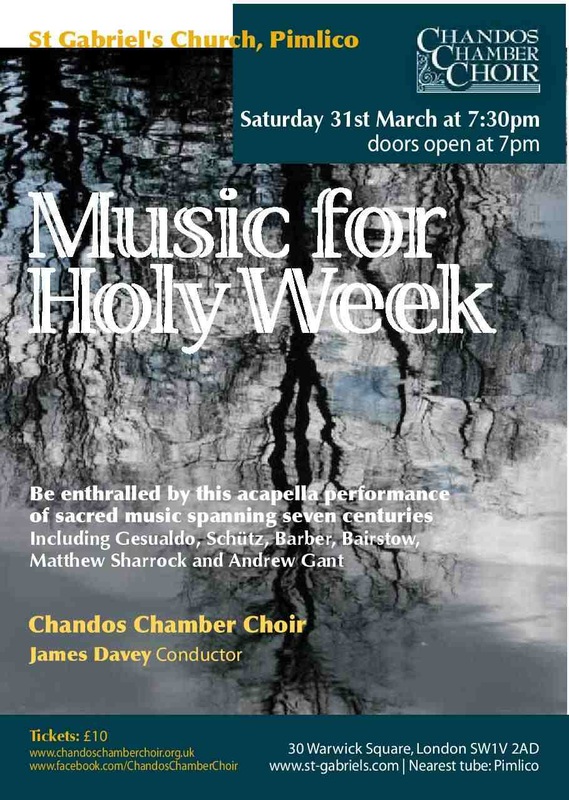 The Guardians Angels performed to mark the start of the Guardian's Open Weekend, crammed with performances and presentations from musicians, poets, writers and journalists. 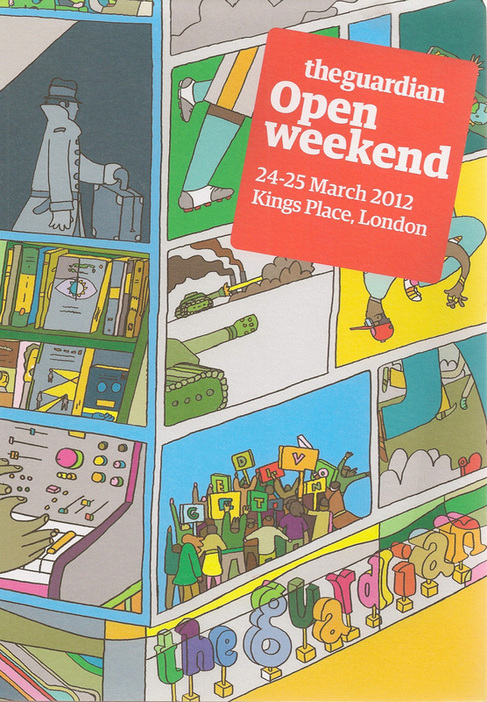 Following a very close battle with 3 other choirs, 4Tunes emerged with the 2nd place prize - a recording session for the choir!

The choir performed 3 songs; Lean on me, Handel's Ombra Mai Fu (the competition's set piece) and Hit me baby one more time. The judges were David Lawrence, Sarah Tennant-Flowers and Lucy Griffiths. 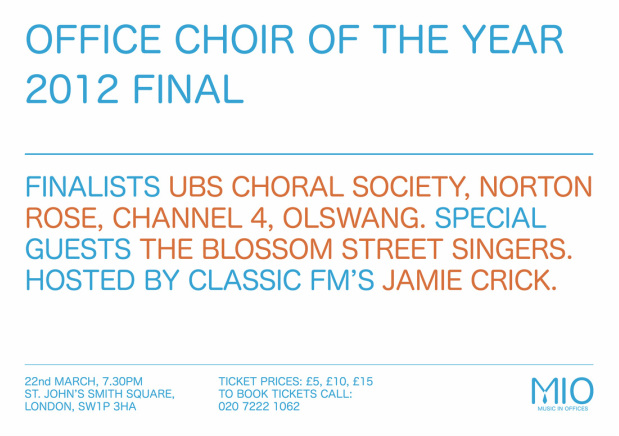 In a service to name the new set of bells at St Dunstan-in-the-West, on Fleet Street, Chantage performed a premiere of a work by Stuart Murray-Turnbull to comemorate the occasion. The new piece was a setting of the Te Deum, which Chantage performed alongside Jaakko Mantyjarvi's Psalm 150 - a setting of the Laudate Dominum which includes a continuous change ringing sequence throughout the piece, following a Kent Bob Minor pattern.

St Dunstan's shares it's space with the Romanian Orthodox church, and the following report on the service was published on the web site of the British Orthodox Church: 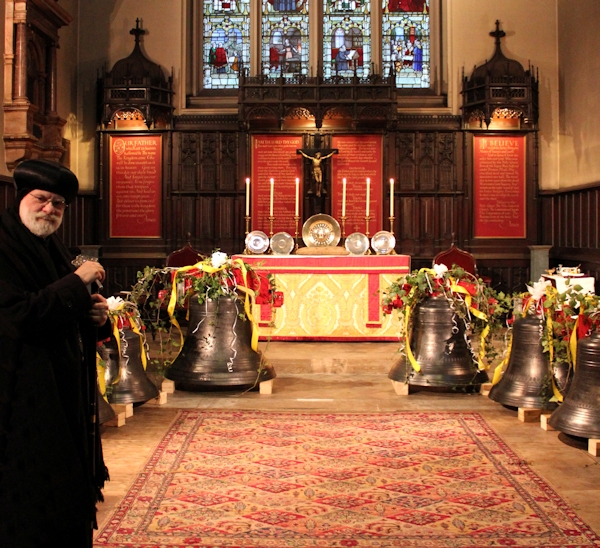 Abba Seraphim joined the congregation of the Guild Church of St. Dunstan’s-in-the-West on 14 March for the service of The Solemn Consecration of the New Ring of Ten Bells, which was performed by the Lord Bishop of London (The Rt. Revd & Rt Hon Richard Chartres). Although the ceremony is quite a rarity, the Bishop of London admitted that this was the third set of bells he had consecrated in the City of London in recent years (St. Magnus the Martyr in 2009 & St. Michael’s, Cornhill in 2011).

Although it took place within the Lenten season, the ceremony had a festive feel to it, with Psalm 150 sung in Grandsire Triples and a newly composed Festal Te Deum by Stuart Murray Turnbull.  The bells, decorated with white ribbons and trailing ivy, were displayed in the sanctuary as the bishop and clergy, in gold vestments processed into the church to the strains of J.M. Neale’s “Christ in Made the Sure Foundation”. Following the old Pontificale Romanum the bells were each sprinkled with Holy Water, before being named by their sponsors, anointed with Oil of Catechesius, consecrated with Chrism and solemnly censed. Not only were they censed on the outside but a long-handled chafing dish was used to incense the interiors. The bells will now be hung and it is intended that they will first ring on 5 June when H.M. The Queen enters the City of London on her way to St. Paul’s Cathedral for the Service of Thanksgiving.

The service was followed by a reception generously hosted by Hoare’s Bank in Fleet Street.

Apart from being one of the ecumenical guests, Abba Seraphim’s had a number of reasons for his interest in the service: St. Dunstan was Abbot of Glastonbury; Abba Seraphim is a direct male descendant of the celebrated thirteenth century Kentish bellfounder, Stephen Norton; whilst another of his ancestors, Samuel Hugh Newman, was baptised in old St. Dunstan’s on 25 October 1798.
Saturday 14th January 2012

In a BBC Radio 3 broadcast of The Choir on Sunday 8th January, presenter Aled Jones previews the London A Capella Festival, and some of the groups taking part. The programme included a recording of Chantage singing with the Swingle Singers at a concert in early 2011, for which Chantage had commissioned Ken Burton to write a new work for the two groups to share.

Though an admirer of the Five Negro Spirituals by Michael Tippett, James felt the set didn't flow together well in the choral version. They lacked the context of the Oratorio, A Child of Our Time, from which they originated. The commission was to compose a set of interludes for the five songs in the set, and Ken wrote a spiritual set for the Swingle Singers to premiere, alternating with Chantage singing Tippett's choral version. 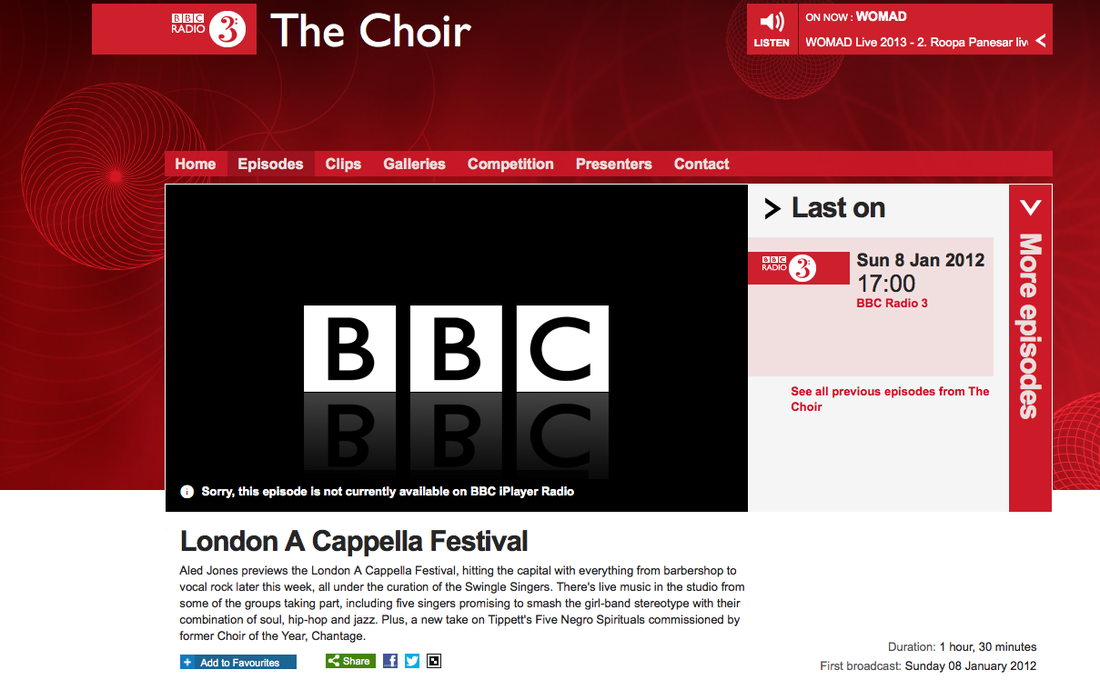