Following a recording session at BBC Maida Vale Studios earlier in the year, Chantage's recording of three commissioned works is broadcast on The Choir, with Aled Jones presenting. The prize for winning the Choir of the Year competition, in November 2006, was to have a new work commissioned by the BBC for the choir. After some discussion it was agreed that this could instead be divided amongst 3 composers, to write shorter works each, and so pieces were commissioned from Richard Allain, Gabriel Jackson and Sir John Tavener.

The broadcast was put out over the Christmas break in December 2009. 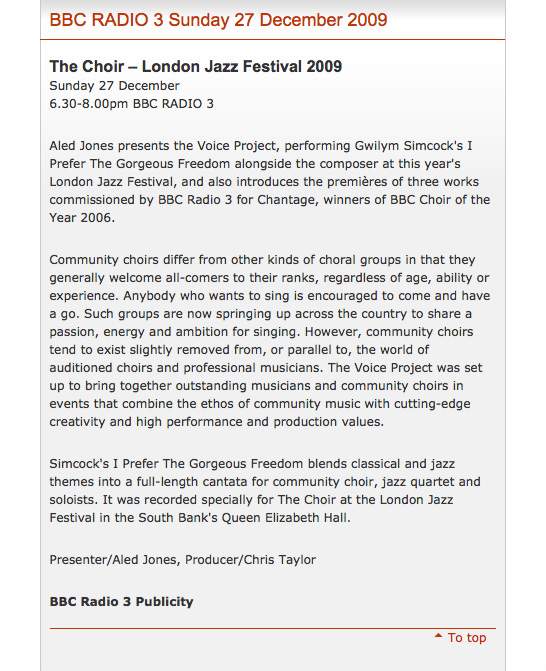 Brought together by Director of Music, Will Fraser, the St Peter's Singers is an ad-hoc group that is formed for special services at St Peter's church in Vauxhaul.
James Davey was invited to conduct the choir, singing various carol anthems for the church's annual Carol Service. 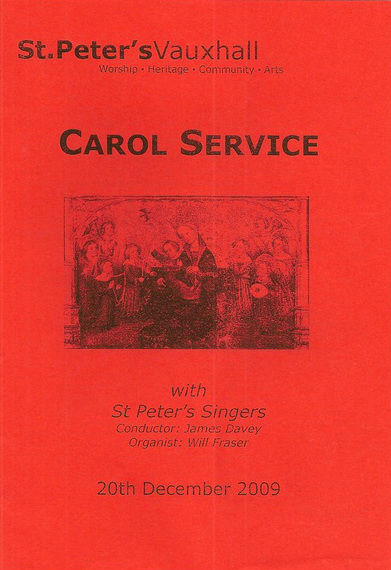 Aylesbury Festival Choir, formerly called the December Singers, performed at the annual CarolFest in the main square in Aylesbury Town Centre, to a large crowd of spectators and supporters. The gathered crowd were handed word-sheets and encouraged to sing along with the well known carols, being entertained in between songs by a local Radio DJ who compered the event. 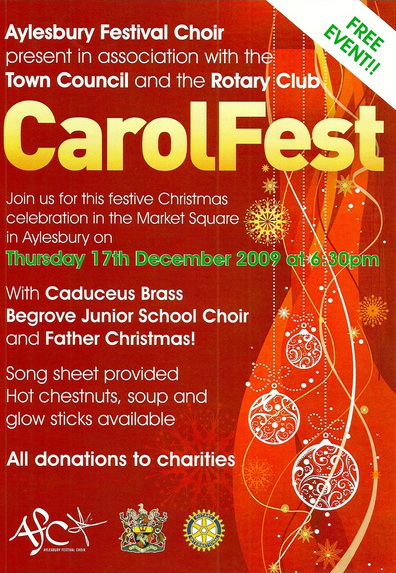 Angels sing at Christmas
Just a month or two earlier, this article about the Guardian's Angels was published in 'The Old Un's diary'
Thursday 10th December 2009

Aylesbury Festival Choir performed their annual 'Carols for everyone' show at the Aylesbury Civic Centre, along with children from two local schools.
Children from Bedgrove Junior School performed in their school choir and handbell ringing group, and children from Turnfurlong Infant School delivered a nativity tableau whilst the choirs filled the background with the carol, Away in a manger.
Sunday 29th November 2009

Central Harmony, a community choir in Hounslow, joined forces with the Bridge Quartet this term to give several collaborative performances to local audiences. The programme included a version of Pachelbel's Canon in D, in which the Bridge Quartet played the original Canon on their strings, whilst the choir sung repeated sections of the Canon in the style of the Swingle Singers. 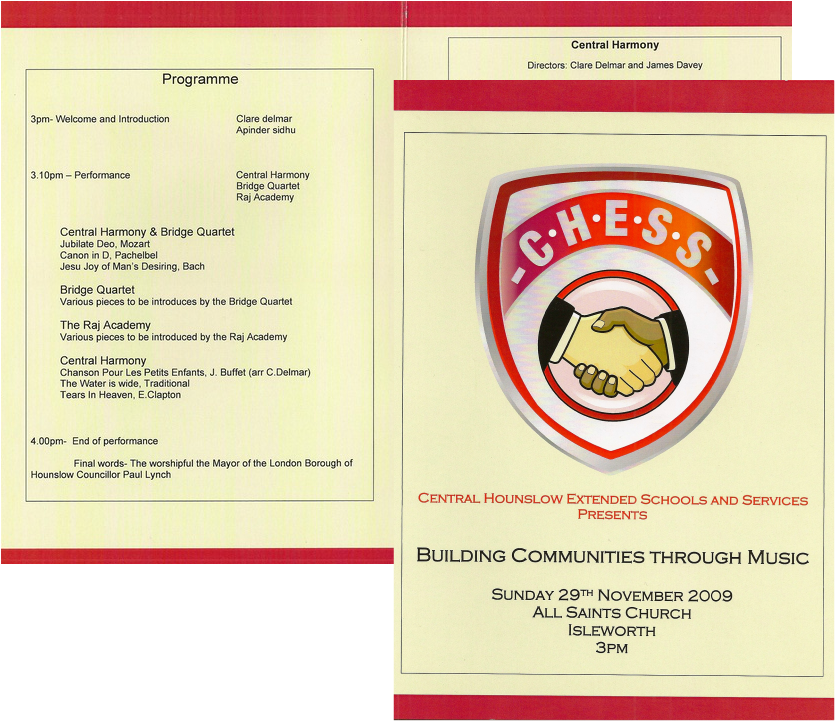 The Aylesbury Festival Choir performed a mixed programme of Opera and Jazz, in a programme that was not their usual style, but which was a great success.
Joss O'Kelly form the Bucks Herald reviewed the concert:
Saturday 7th November 2009

Chantage celebrated turning 10 years old by putting on a celebratory concert at the Royal College of Music in the stunning Amarylis Concert Hall. The programme was entirely chosen by votes from the choir, who were given a list of all the repertoire that Chantage had performed during it's 10 year history. 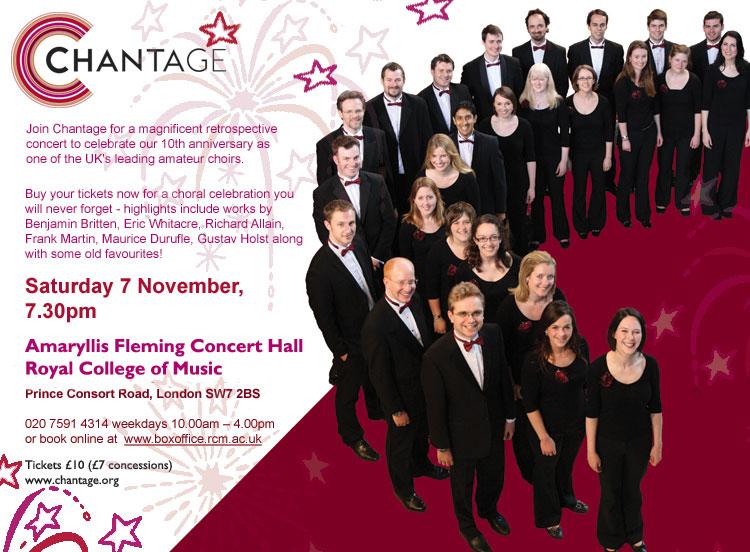 James Davey returned to the Canford Summer School of Music for the second year, leading the Cappella Choir.

The Gallant Weaver, by James MacMillan, was the favourite piece of the week. Here's a short video recording (low quality and distorted balance of course) of MacMillan's piece from the stairwell of the Sherborne School Chapel - some say the best accoustic in the building - as a fond farewell to everyone until next year!

In support of the New Horizons Youth Centre, and following an internal choir recruitment project, the choir performed Faure's Requiem along with some other classical favourites. The concert was not entirely classical music, but moved significantly away from the choir's previous programme of pop and rock music.
Saturday 9th May 2009

The Association of British Choral Directors and Making Music joined forces to present 'The Big Sing' in Darlington, a day of singing and conductor training, tutored by James Davey and Paul Spicer.

James Davey began the day with a warm-up session and then lead conductor training sessions whilst Paul Spicer took the singers through Ralph Vaughan-Williams' challenging work, Toward the Unknown Region.
Saturday 25th April 2009

To mark their 50th Anniversary since they were formed, the Aylesbury Festival Choir performed the full version of George Frederick Handel's Messiah. This was James Davey's first concert with the choir, having taken up the post of Musical Director in January 2009. It featured a top class line up of soloists and was accompanied by the Lawes Baroque Orchestra, a professional orchestra whose players work with Harry Christophers and the Sixteen.

The performance was recorded and is available for purchase from the choir, via their web site. 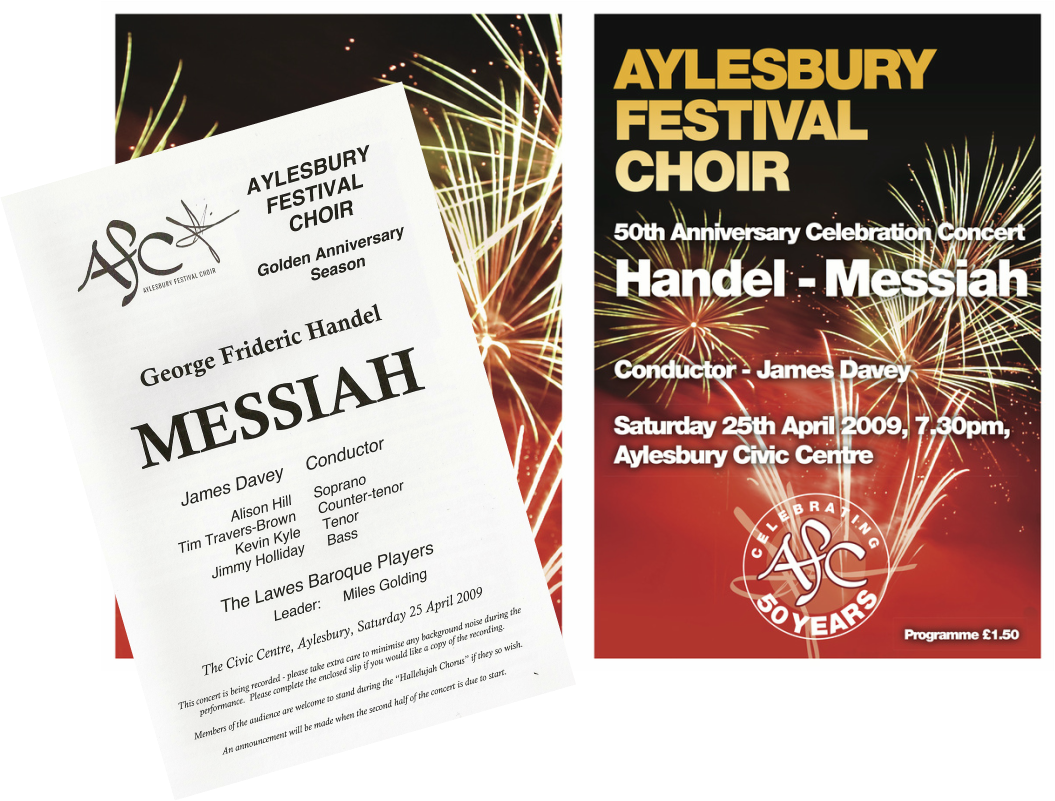 As part of a BBC Radio 2 show called 'The Great British Songbook', a number of popular songs were being broadcast in various arrangements, to discuss what elements of a song made it worthy of being included in this collection.

Chantage recorded an arrangement of Sir Paul McCartney's song, Baby I'm Amazed, especially arranged for the recording by Richard Allain who assisted the Producer's from the sound booth. 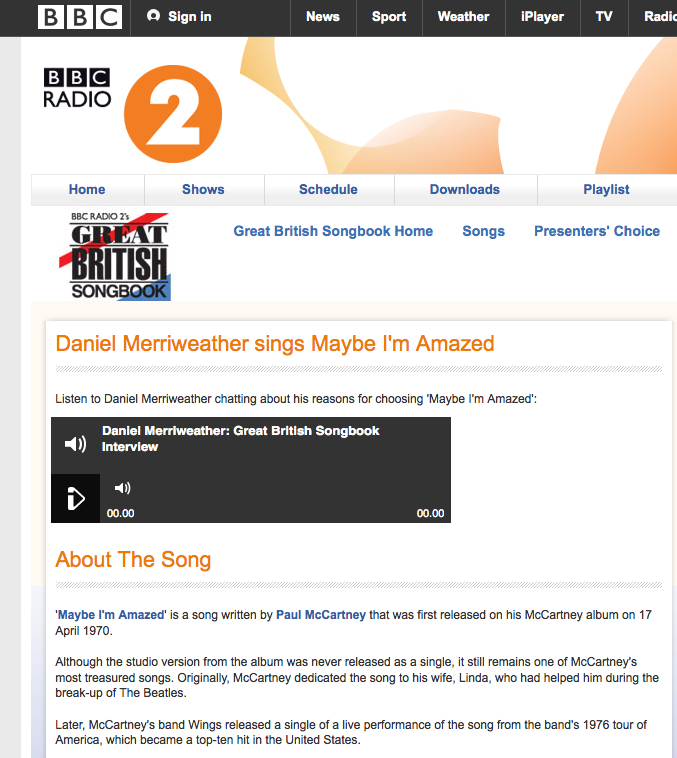 The Fleet Singers perform with Les Grooms at the Barbican
At around the same time, Pam Gilby, Chairman of the choir and the driving force behind the running of the group, was nominated for, and received, an Unsung Hero award for her work in the community of the borough of Camden. 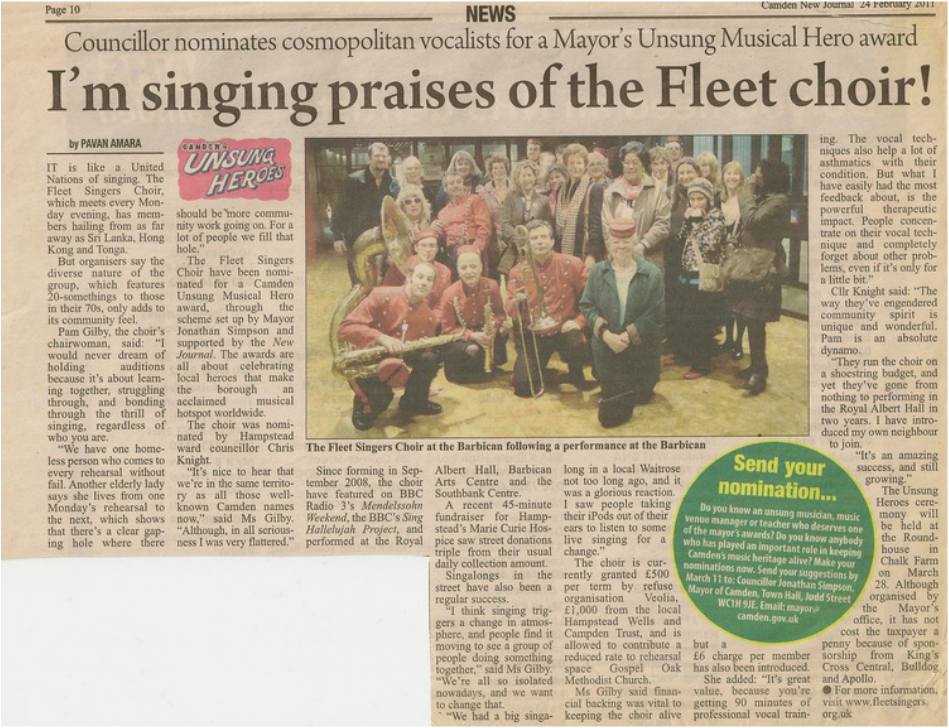 Chantage were invited to record at Abbey Road Studios with indie band, Elbow, in a live performance/recording of their Mercury Music Prize winning album, The Seldom Seen Kid. The recording was broadcast on BBC Radio 2 and then screened on the BBC's Red Button and online for seven days (Saturday 31 January to Saturday 7 February).